Saturday Dustin, Cooper, and myself got ourselves up bright and early, packed the car, and headed out for an adventure in Sonoma County. The plan which, was a surprise to all in the car but me, was to go up to the beautiful Kunde Family Estate Winery and join in a dog hike through the vineyards. The hike started at 9:00 am at which meant we had to leave the city by 7:30 am in order to get there on time.  I  have to say getting up when it is still slightly dark out on a Saturday morning is not my usual cup of tea, but once we made it to the Estate I was glad we had made the trek.

Once we parked our car and walked up to the meeting point it was fun to see how many people would be joining in on the morning festivities. There were about 50 people in total along with all various types of dog breeds.  As Dustin and I scoped out the group it was interesting to see how many of our fellow hikers dogs resembled them. This of course made me wonder if Cooper looks like myself or Dustin? There were labs, golden retrievers, a very macho french bulldog, a wise looking bloodhound, and my favorite an adventurous bichon frise named Biscuit  just to name a few. 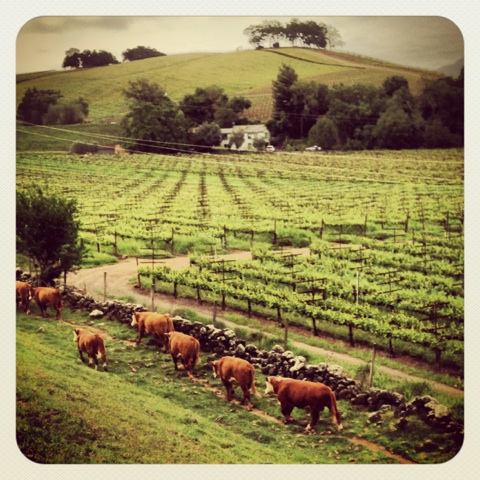 The hike was conducted by Jeff Kunde himself a 4th generation owner of the vineyard and his two yellow labs.   The slightly strenuous hike covered 1,850 acres across the breathtaking and may I even say magical estate. As we started the hike I was overwhelmed by the beauty all around. The morning air was cold and brisk, however this did not stop the dogs from flying, jumping, and running all around us.

We made our first pit stop alongside a large lake where the dogs jumped into immediately. I have never seen so many grinning labs paddling as fast as they could. At this point in the walk we were in the valley where the white grapes are grown and harvested. Glasses were handed out and at 10:00 am I was able to start my day with a tasting of their Sauvignon Blanc. Thank goodness I had eaten a banana before we started, I was not anticipating drinking while on the hike. However those are what I consider the good kind of surprises. The Sauvignon Blanc was light, crisp, and refreshing and I might even say a great spring morning wine.

As we continued to the next valley the sun started to peak out and the cool morning air was quickly rushed away. We had made it into the red grape valley and there we were able to taste the Reserve Zinfandel. Zinfandel’s are my absolute favorite wine varietal in red’s. They are typically robust and full bodied. This Zinfandel was delicious, although not as rich as I would prefer. However at 11:00am I was still very happy.

The last stop in the Valley was in a beautiful little area nestled in between a meadow of trees. It also happened to be at the part of the property where Jeff Kunde himself grew up. His family home was standing 500 feet away from where we were all stood and enjoyed the last wine tasting of the morning. Here we indulged in the Dunfillan Cuvee which is a blend of Cabernet Sauvignon and Syrah. This wine was a little dry for my liking, but was Dustin’s favorite of the morning.

We made our way back to the tasting room where we were served with a delicious picnic style lunch. There were salad greens with ranch dressing on the side, potato salad, various wraps, and of course cookies. In my typical fashion I loaded my plate with a ton of the green salad and skipped the dressing since 1 tablespoon of ranch can sometimes be upwards of 75 calories! This means 2 tablespoons of dressing would be the equivalent of 1 glass of wine.  I don’t know about you, but I would rather have a glass of wine. I then grabbed a smaller portion of the potato salad and one half of the veggie wrap as it seemed to be filled with the most delicious stuff. I skipped the cookies, but did manage to steal a small bite of Dustin’s. 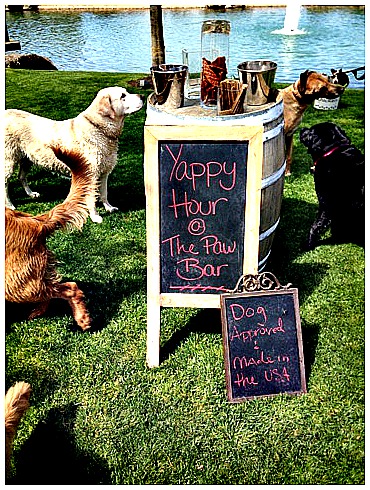 As for the puppies they also had a nice lunch treat waiting for them. Along with the Paw Bar filled with various kinds of dog treats they also had a water tasting for the dogs. Chicken Water, Bacon Water, Mojito Water, and Beef Water. Cooper tried all 4, but ended up just going for the plain water. Boring choice, but I guess the dog knows what he likes.  Overall the hike was fantastic and I highly recommend it for anyone who wants to take a day trip out of the city and enjoy time drinking with their pooch. Their next eco-dog hike will be June 7th, so if you want to go I say make a reservation soon as they book up fast!