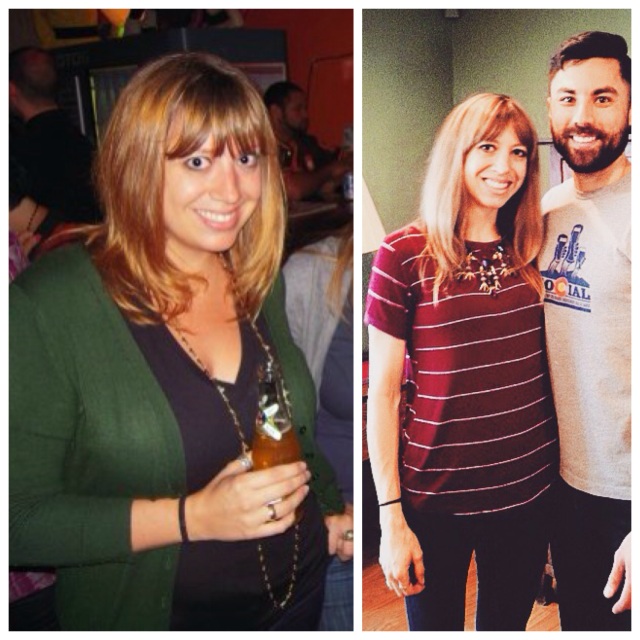 It was 4 years ago today I made a change which would end up impacting my life in more ways then I could ever have imagined. It was not a decision I made overnight. I had tried to lose weight here and there, but it took years for me to finally feel ready and committed to make a permanent change. I was 27 at the time and had lived my entire life being unhappy in my own body. A sad, but honest statement.  Once I commit to something I am always fully dedicated, but I am also a believer you need to setup goals that are achievable. I mean no one would expect you to run a marathon after only one week of training, so I looked at weight loss the same way. My New Year’s resolution was to lose just 20 lbs.

I can remember this New Year’s Day so vividly, even though it was 4 years ago. I guess that is how it goes though. When something really memorable happens, you remember the day better. I woke up feeling motivated and ready. I could do this! First thing was first, I had to find out how much I weighed so I knew the weight I needed to achieve. This was probably one of the scariest experiences I can remember with myself. Facing reality and letting go of denial.  I was home for the holidays visiting my parents for Christmas and went up to their bathroom to step onto the scale. I stepped my right foot, then my left. I waited in anticipation as the number calculated. Then it appeared, 185lbs. I could not believe what I saw. However instead of letting this spin me into a dark depressed place, I used it as fuel for my fire. I could get to 165 lbs. I WOULD get to 165lbs.

I don’t remember exactly on how I found My Fitness Pal, but I did. I entered my weight, and my goal. It told me I needed to eat 1,200 calories a day to lose 2 lbs a week. Ok, I could do that. I went to lunch with my best friend Kristen that day. I had to look up the menu of the restaurant before I left to start looking up calories in order to know what I could eat. Wow, a lot of what I typically ate was REALLY high in calories. I had no idea. This was going to be a change for sure I remember thinking. I finally decided on soup as a good lower calorie option. I ended up ordering the French Onion soup with a side of fruit instead of my usual bread.

Kristen and I had been friends since growing up and she was already very avid about health and fitness. It was easy to talk to her about my new plan. She was very supportive and said she would encourage me every step of the way. Throughout the last 4 years Kristen has been my strength, my crutch, and my confidant to get me through the tough days. I suggest anyone starting a big change find someone who can be your support. It is not easy making big changes and you need someone who you can talk to that understands what you are going through. Kristen has almost been like a sponsor at times. When I feel like I can just not live another healthy day or when I want to give up I reach out to her. She knows how to calm the storm per say.

That night my parents and I had dinner together before I left to come home to San Francisco. I ordered half a french dip sandwich with a side salad. I felt satisfied and still a little hungry. A feeling I would learn to soon become very familiar with over the next few months. I remember how supportive my parents were about my new goal. I mean they had been the ones to encourage me and give me the honest truth when no one else would. I have to say I could never have done it without their push, love, and support. Once I had bordered the plane I looked out the window and could feel a change in me.  This time would be different.

So why am I telling this story today. Well I want to remind other’s that New Year’s Resolutions do not always have to be goals that we make and never fulfill. I am proof that you can make a goal, stick to it, and actually make a change. There is nothing wrong with starting with a small goal and working your way up. When I decided to lose 20 lbs I had no idea I would actually end up losing 70 lbs. If I had started with a goal to lose 70 lbs it might have been to daunting and I could have easily gotten discouraged and given up. Setting a smaller goal and meeting it drove me to keep going. After I met one goal I would set a new one. Once I met that one I would be so encouraged I would set another one. Next thing I knew I had lost 70 lbs. I do the same thing now. For example I will set a goal at the gym to just run 5 miles. Next thing I know I have ran 8 or 10. However if I told myself I was going to run 10 miles that morning I might have talked myself out of going.

Changing yourself is hard. When you make a big change you have to know you can never go back to where you were. I can never eat or be lazy like I did before I lost the weight. However now knowing what I know, there is no way I would want to go back there. Health and Fitness is about so much more then how you look. If that is all it was then it would be hard for most people to keep at it. Being healthy is about feeling good, having energy to do the things you love, and making the times you indulge that much better.  Deciding to make a change is the first step. Once that is done you just have to just trust what you will getting from the change will end up being so much better then what you are giving up. Trust me on that 🙂